Founded in 1996 by John Llewellyn, Llewellyn’s Construction started out as a small “dozer” company with most of the emphasis focused on catering to the residential consumer and their basic land clearing and excavation needs. Fortunately, it did not take long for Llewellyn’s Construction to take off and become a trusted authority and leader in all phases of earth work for Montgomery, Harris, Walker, Waller, Grimes and the surrounding counties. As each project’s scope of work expanded, so did their dynamics. John and his ever-growing team of experts, embraced the challenges associated with expanding pre-conceived boundaries and testing skill levels, to constantly produce bigger and grander finished projects that far exceeded the customer’s expectations. From day one, John took great pride in creating a finished reality that our customers had only imagined, as a possibility. 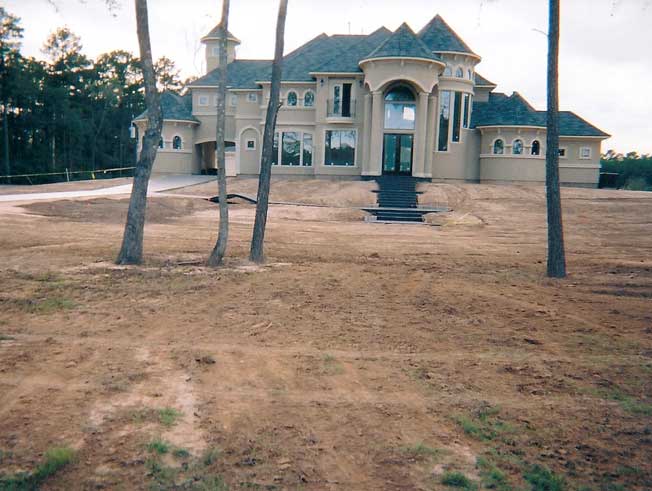 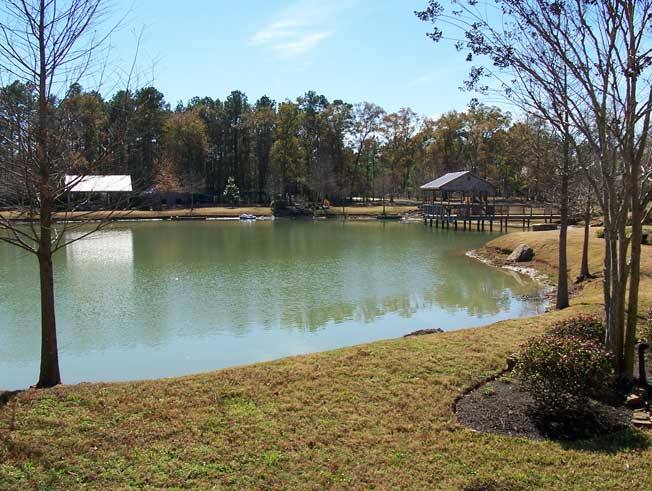 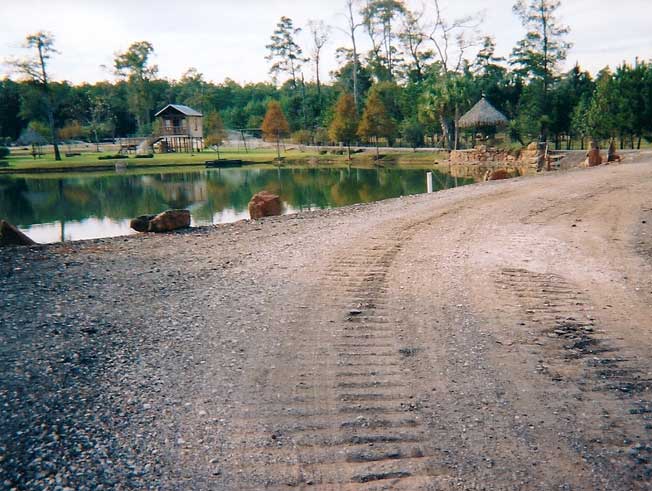 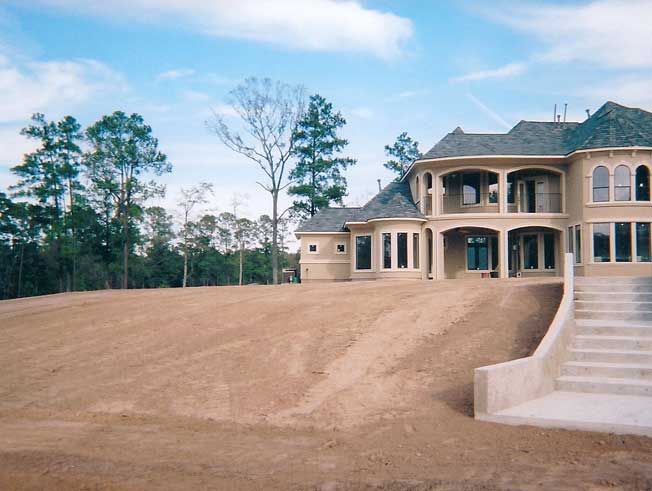 Our Approach to Land Clearing

Methods used to clear a parcel of land is determined by taking into consideration the:

There are times, however, when a property is so densely covered with vegetation that a comprehensive assessment cannot be made. Ironically, this overgrowth of vegetation, including trees, may be the main reason for purchasing your specific parcel in the first place.

Llewellyn’s Construction “bulldozed” into the new millennium with sound opportunities and an aggressive strategy to broaden and re-define the company’s focus and direction. In 2003, Llewellyn’s Construction incorporated; and along with the company’s restructuring, a new philosophy emerged. The only way to grow was to diversity. Residential was and will always be our bread and butter, but it was time to take our knowledge and skill sets to another level. This meant intergrading the commercial, industrial and farm/ranch sectors into the company’s ideology. This proved to be a natural complement and opened the doors to several larger projects. Even with the complexity of the company successfully crossing over to other venues, John never forgot that the foundation of his company was entrenched in the residential sector. In fact, our residential clients have expanded their expectations as well; giving us an impressive list of projects. One such project includes the construction of a 5-acre pond that is 52 feet deep with a raised house pad with a build-up of over 21 feet, encompassing over 6000 S.F. of living space, on the first floor alone. 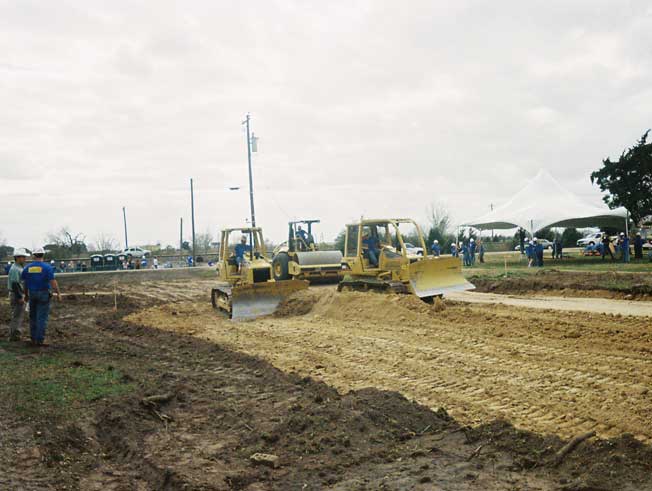 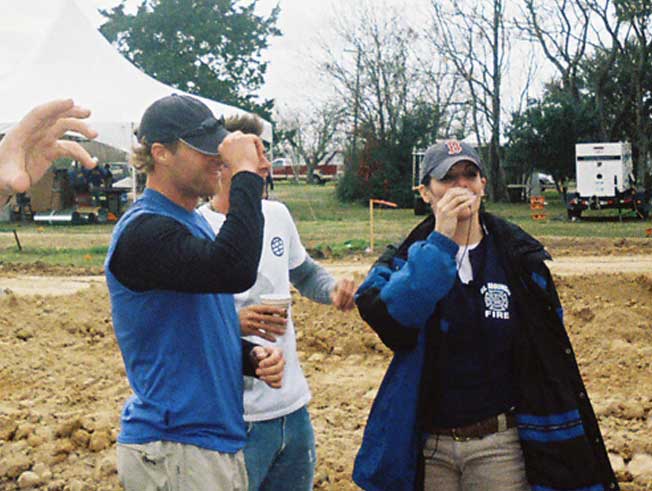 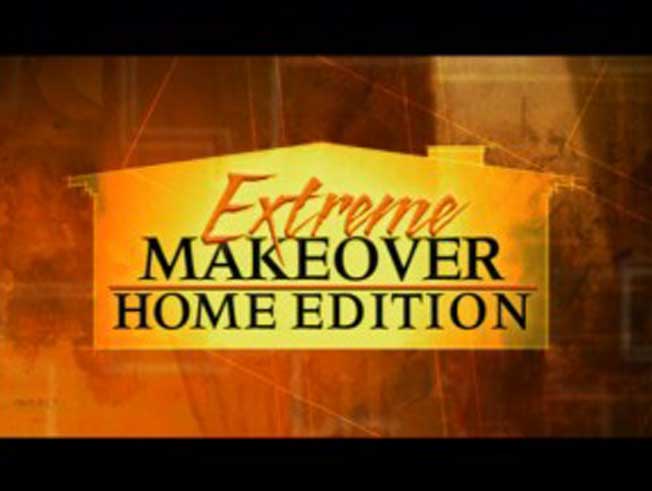 Through the years, there have been many philanthropic projects that Llewellyn’s Construction Inc. has been proud to support but two stand out and are very dear to our hearts.

In 2006, Llewellyn’s Construction Inc., was extended an invitation to participate with the ABC TV series EXTREME MAKEOVER HOME EDITION, in conjunction with Royce Homes. We were honored to demo the old home and barn and then construct a new house pad that would incorporate all the special provisions designed to help this young couple’s very sick twin girls, in Rosenburg, Texas.

There is not enough that can be done, to support our veterans and all they have sacrificed, to keep us safe and the United States of America on top. During the summer of 2017, we had the opportunity to show our gratitude and appreciation, by working with OPERATION FINIALLY HOME, an organization dedicated to providing custom-built mortgage-free homes to America’s military heroes. We were again honored to donate our services to help construct a new home for a wounded Veteran and her family.

To have the opportunity to do what we do best for such humanitarian causes is both a privilege and a life changing experience which has positively affected all who participated. 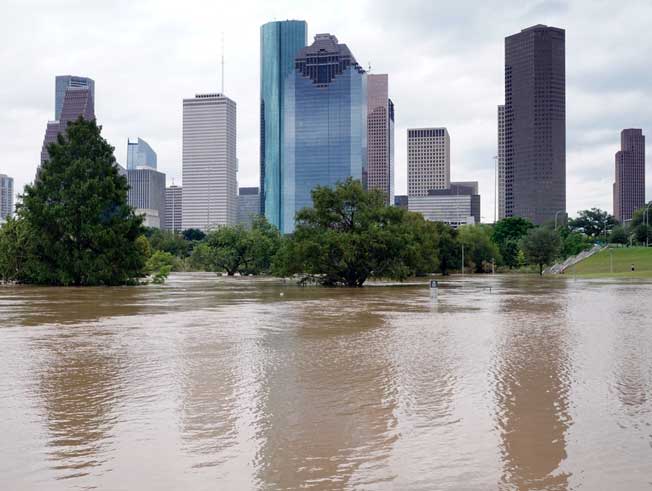 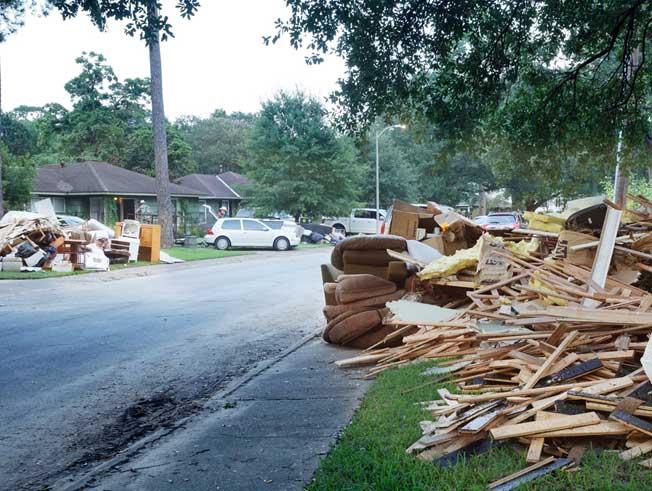 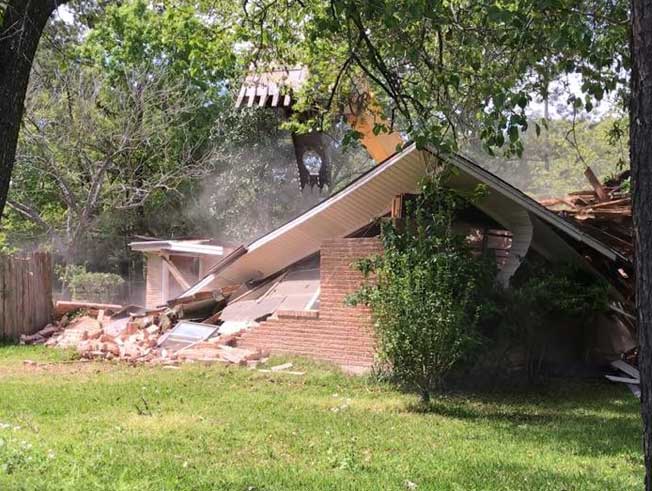 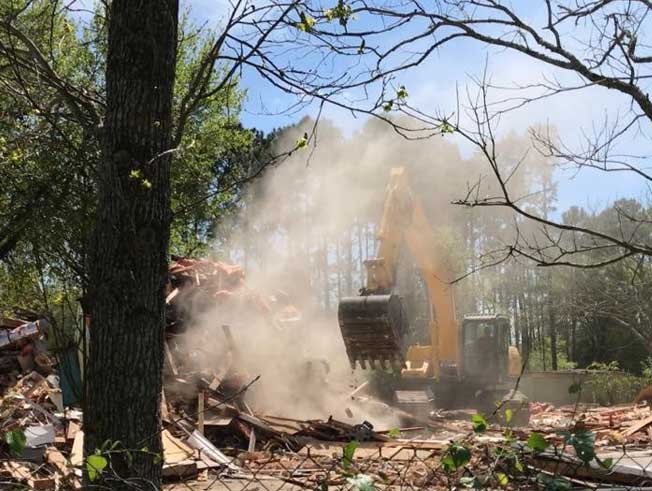 In the Face of Disaster

Our community means so much to everyone associated with Llewellyn’s Construction Inc., and we try to give back accordingly. However, living in Southeast Texas has put our resources and resourcefulness to the test a time or two. Unfortunately, we have been involved in several disasters and on every occasion, we step up to help our neighbors by banding together and conquering whatever Mother Nature and the elements dish out.

Hurricanes Ike in 2008 and Harvey in 2017, showed us the power and damage that comes along with any class Hurricane, when you are its target. With Ike, the winds caused so much damage that most of Southeast Texas was without power for an average of three weeks. Llewellyn’s Construction Inc. had a full crew assembled and were out by 3:00, the same afternoon, taking down damaged trees and removing fallen debris from rooftops and streets so the cleanup and rebuilding process could begin. Where Ike was a quick hit, Harvey decided to circle around, hitting the same locations repeatedly, before finally moving out. The rain amounts were measured as high as 61 inches in some locations, causing over 135,000 homes to be damaged or destroyed. Llewellyn’s Construction is doing its part by helping in the demolition of damaged/destroyed homes and with the removal of an estimated 8 million cubic yards of debris. The devastation caused by Harvey will be felt for years to come and has surpassed Katrina as the costliest Hurricane on record. 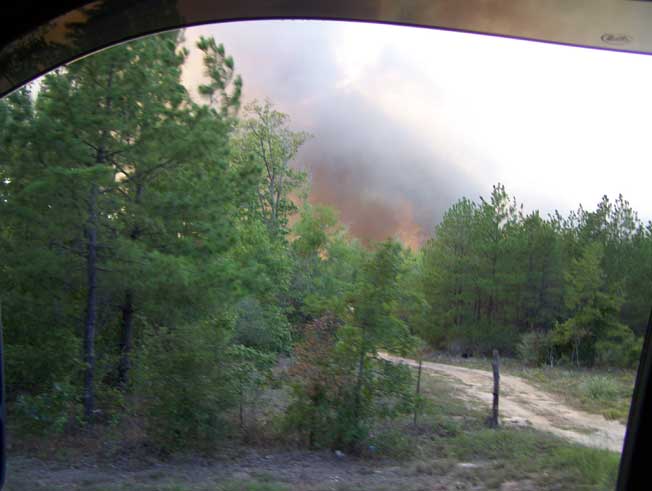 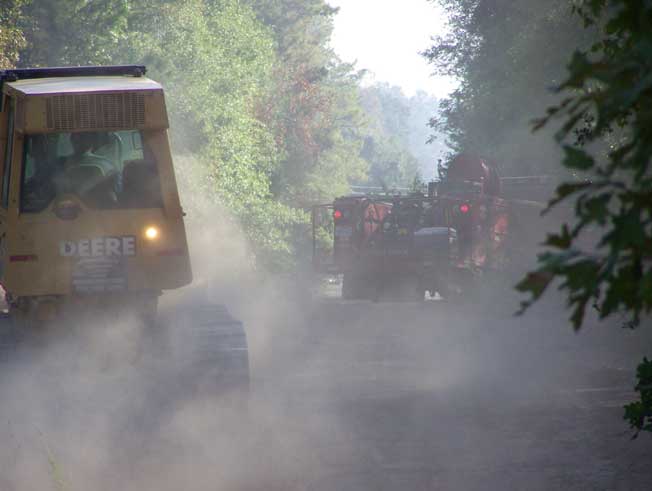 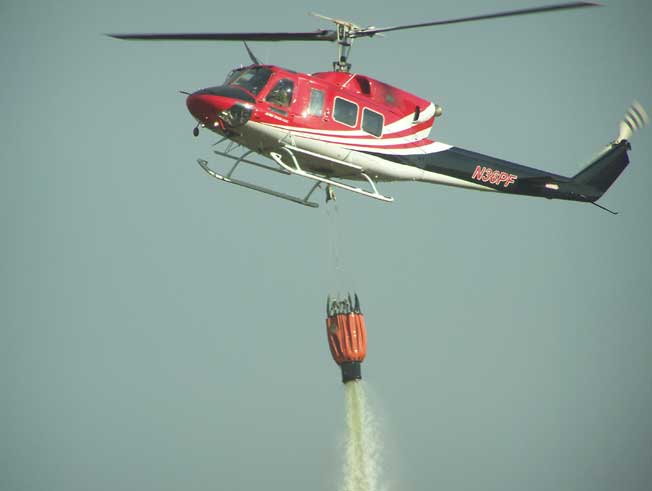 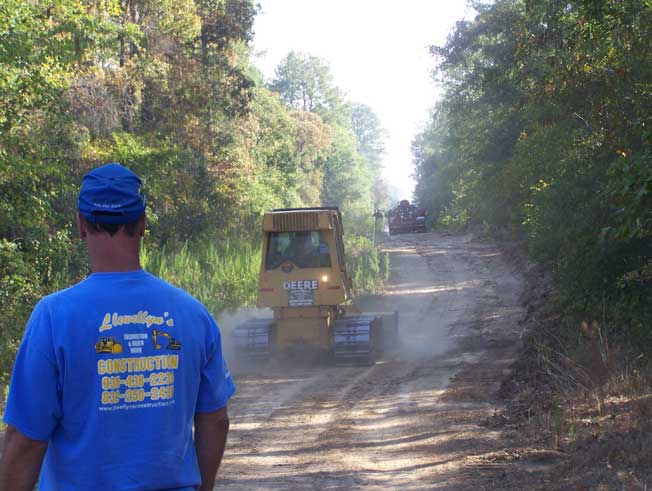 Ironically, during the summer of 2012, it was the lack of water that caused devastation. Texas was hit with one of the worst droughts recorded and we were looking at the possibility of a second Dust Bowl. Ponds were dried up, hay was being shipped in from as far as Nebraska. At three times the normal cost, our livestock was paying the price. Then, it got worse! A spark from a bar-be-que pit started a wild fire that burned thousands of acres and spanned across three counties. With no rain in sight and high winds, our entire way of life was being threatened. John volunteered his company equipment and labor to help get this massive fire under control. He led the way, with three Forestry Department dozers staggered behind, on a track around the approaching fire, cutting out a fire wall that finally held, keeping the fire from spreading further. This was the turning point. Hundreds of brave volunteer Firefighters were able to take control and contain the fire before it caused further damage.

No matter what forces of nature or natural disasters come our way, together…

WE ARE TEXAS STRONG!

Llewellyn's Construction is proud to have served the community of Magnolia, TX and the surrounding areas for over 20 years! When you hire us for land clearing, excavation, pond and lake construction or any of our other professional construction services we assure you the same quality and commitment as we provide on every job we do.